skip to main | skip to sidebar

A little more than two months after my Peace Corps service ended, I returned to Bulgaria for a few days to pack up my belongings and to see my former colleagues and students and some of my friends. I wasn’t sure what to expect, but what I saw and experienced made me feel pretty good. 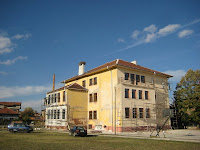 First, the little old school at which I had taught for three years was in the middle of a major facelift. It was pretty cool seeing a school that just a few years earlier was on the verge of being closed for good being brought back to life.

Second, with the exception of a few teenagers pretending to be cool, every single person I encountered who I had met during my three years at site met me with a huge, genuine smile and friendly handshake. In a country where smiles are few and far between, those shared smiles really meant a lot.

Finally, saying goodbye to those who were closest to me during my three years was as difficult for them as it was for me. On my first day back, Baba Ristena brought me a large bag full of peppers, cucumbers, and tomatoes. Her pain was obvious when I told her I couldn’t accept them because I had given away my knives and cutting board and would be leaving early the next morning and wouldn’t have time to eat them. When that next morning came, saying goodbye to her was gut-wrenching. Almost seventy years earlier, she had been forced to take shelter from American bombing raids over Bulgaria. Fed a strict diet of anti-American propaganda during the Cold War, she had every reason to dislike me when I moved into her guesthouse. But for three years, she cared for me, nurtured me, and fed me like one of her own. And as the tears rolled down her face, and she held me tight while trembling in my arms, and all she could say was, “Oh, Brian,” it was both heartbreaking and heartwarming.

Peace Corps service is about many things, nothing more important than those shared smiles and tears.
Posted by Brian at 6:26 PM

The views posted in this blog are my own and do not represent the Peace Corps or the U.S. Government.

Thanks for stopping by ...

And a special thanks to anyone who has taken the time to comment or recommend the blog to others.
If you want to use any of the photos for non-commercial purposes, no problem. Please just let me know and give me credit.